Perennials have become increasingly popular in home landscaping due to their low maintenance nature and dramatic aesthetics in the winter. They come in various shapes and sizes that are eye candy through any season of the year, making it a fitting centerpiece or accent plant in your garden or flowerbed. Some of the most popular ones include hostas, liriope, daylilies, hydrangeas, sage, cone flowers, astilbe and ornamental grasses. One of the most common questions clients seem to have about perennials is when the best season is to begin pruning.

Choosing when to cut your perennials is a matter of the gardener’s preference. It is a popular choice to leave them be until spring, for many believe it enlivens their garden during the gloomy months of winter. For 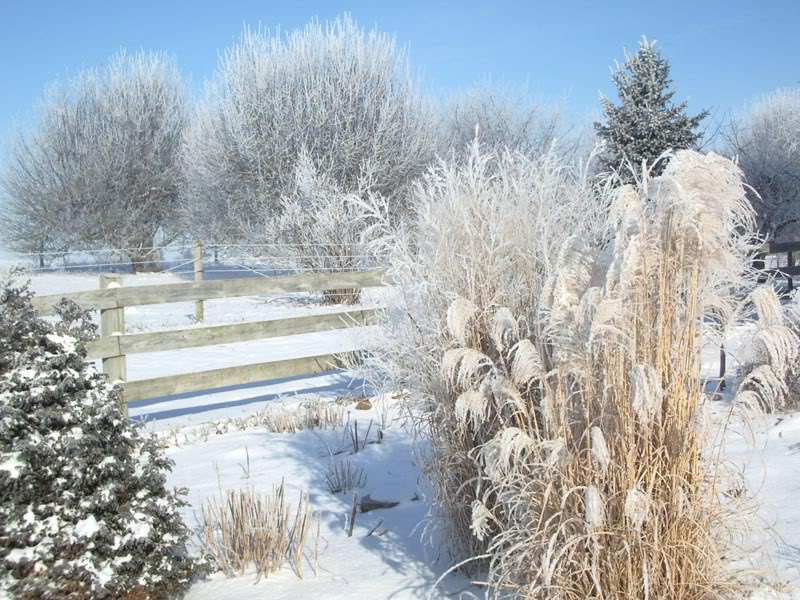 example, ornamental grasses provide texture, contrast and color against the crisp white snow. Aside from adding interest to an otherwise grim and somber backdrop, ornamental grass left standing to blow freely in the winter winds makes a great refuge and provides treats and nesting materials for surrounding wildlife that stay to bear the winter months.

Others, however, feel most perennials are an eye sore to their garden if left alone over the winter months. The raggedy, visually unappealing browning foliage and bare flower stalks is better thought of as being confined to the trash or sent off to a compost. Some also think it’s easier to cut the tops of plants when they are still relatively fresh and upright in the fall.

If you desire the contrast your perennials give off against the stark winter sky, cutting in early spring before you start to see the emergence of new growth and after the last snow is your best option for pruning. For spring pruning, plan to get dirty in your garden around March before you start applying mulch to your landscape beds.

For those that think the gold, lifeless perennials need to go in autumn, cutting back in late fall when the leaves have melted down and become yellow— typically after the first frost— is the ideal time to do so.

Here are some tips on cutting back your perennials, no matter your seasonal preference:

A big perk to cutting back your perennials is to gain a crisp, clean look, allowing your plants to focus its energy in the roots. If you are unsure about when, what and how to prune, don’t prune it! Instead, give our professionals at Bluegrass Landscaping a call to help you with your lawn care maintenance needs! We are committed to simplifying your life and delivering high quality work!

Get a Quote Today

Leave your land in trusted hands

Let us take the stress off you by managing your property and improving your reputation with your tenants, peers, and leadership.

We have used Bluegrass for the past eight years and are pleased with the quality of service and competitive pricing they provide. The appearance of our business is very important to us and Bluegrass takes that worry away. They’ve always been very professional, timely and efficient. We appreciate working with them and hope it continues.

Being a Facilities Manager at a forty-seven acre facility can be a daunting task. I have used Bluegrass Lawn for over two years now for all of my lawn care, landscaping, and snow removal needs, the professionals at Bluegrass Lawn have always went the extra step to make sure the grounds look great by being pro-active with decision making regarding the landscaping, weed control, and snow removal, the work is always performed on time and to high standards making the outside upkeep of the facility a…

I wanted to thank the Bluegrass Landscaping Team for the wonderful job they did on my landscaping. My daughter was getting married the following weekend and my wife wanted our yard to look perfect. The Landscaping Team did a terrific job and made her very happy. They installed weed barriers and filled our beds with beautiful rock. There were some trouble spots in our yard  which was fixed by trenching and mulching to make the yard clean and beautiful. The crew leader, Ray, was an absolut…

Dear Shonda, Thank you so much for all of your help at Primwood. The property looks wonderful! Your help and planning as well as execution have been invaluable to me. You really went above and beyond. Thank you. Sincerely, Autumn Kerrigan

Wow! Outstanding service! I didn’t even have to worry about calling you guys, before I had time to call Bluegrass you were already here! Thank you so much for having your guys here and just taking care of us when we needed it the most! Bluegrass has once again went above and beyond what is expected.

“I just want to compliment you on how awesome DePaul’s lawn care is. The grass looks awesome. Please pass this on to all that are involved with our lawn care.”

It is hard to imagine that we have been associated for over seven years. Over this period of time I feel that our relationship with Bluegrass and you has progressively taken leaps and bounds. It is great to work with a company that truly understands our needs and the manner in which we conduct business. I am appreciative of your approach to understanding our business model and catering to our needs as an organization. I can proudly attest to you all being considered as a true “business partner…